Last year, Microsoft made a surprising (to some) move and acquired Yammer. The acquisition created a quandary for many in light of many recent improvements to SharePoint’s social tools. The question became: When do I use SharePoint 2013’s social collaboration tools and when do I use Yammer?

The rationale behind the Yammer purchase provides some clues toward resolving the confusion.

So why did Microsoft purchase Yammer?

Microsoft was pushing customers toward SharePoint in the cloud and purchasing Yammer, an already established collaboration and social system, dovetailed nicely with this effort. Plus, many companies were coming to Microsoft with a dilemma: their employees were independently setting up Yammer sites to share documents. The Yammer purchase aligned with Microsoft’s marketing push and responded to client concerns about unsanctioned Yammer sites. It also provided Microsoft a convenient means to add some missing functionality in other areas of its technical stack.

Salesforce offers “Chatter,” a free feature that allows document and idea sharing. Dynamics CRM possessed no similar functionality. The Yammer purchase provided Microsoft a means to bridge that gap, plus Yammer and SharePoint easily integrated with Dynamics CRM. As Joel Oleson, a SharePoint evangelist, put it, the combination comprised “a killer trio!”

The following Microsoft graphic summarizes the thinking behind the purchase.

Is Yammer for everyone?

Yammer is not for everyone, at least not yet. Of course, it is ideal for customers considering SharePoint 2013 in the cloud. However, companies sticking with an on-premise solution are better served by relying on SharePoint 2013’s social tools. 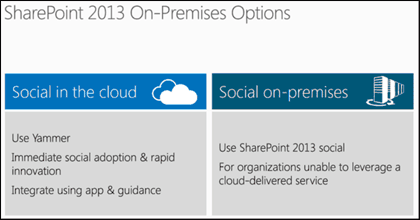 What are the future plans?

Microsoft’s future plans beyond 2014 are not readily evident. For the near term, it appears that Yammer will be recommended as a cloud offering and tightly integrated with Office 365. However, despite Microsoft’s push toward its cloud platform, not every customer will elect to move to the cloud immediately – or make the transition quickly.

My best guess is that SharePoint 2013 social for on-premise solutions will continue to exist for the foreseeable future. I’d even go so far as to predict that Microsoft will update SharePoint on premise and issue new versions. When it comes to the social functionality within, I don’t see any major improvements in the offing. It is in Microsoft’s best interest to push customers to go to the cloud and use Yammer as a marketing device to advance that option.